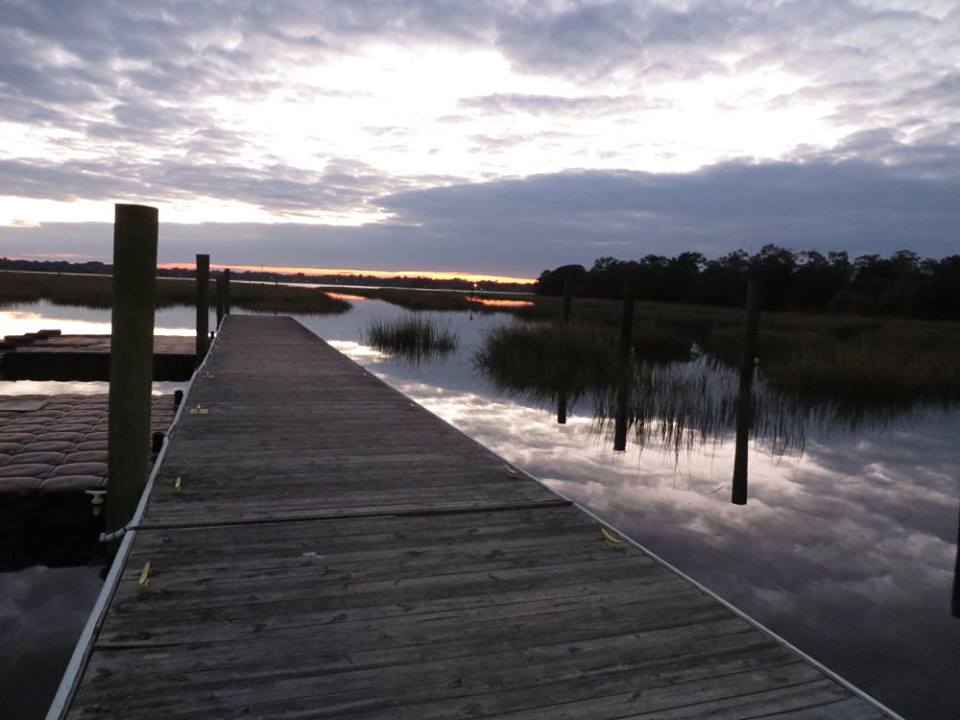 I returned home Tuesday evening this week from a visit to The Citadel. While my son graduated in 2011 I have several “adopted” cadets that I’ve become close to. Several 2016 cadet friends received their rings both Friday afternoon then also on Monday. I enjoyed visiting with their families.

One mom in particular, Laurie Connors, I have corresponded with for the past three years, but I never met her. I met the dad and their son on matriculation day in 2012. I’ve taken the cadet to meals when I’ve visited. Her daughter and mine share several interests. We’ve exchanged gifts in the mail, talked on the phone, but until this past Friday afternoon we had not met face to face. We had a great visit around the picnic tables by the boat house. They went to get ready for the Friday evening Ring Ceremony, when the cadet escorts their mother, or other significant family or friend through the ring, and I was going to grab a bite to eat since I had not had lunch.

What happened next was a surprise, but the type I’ve come to expect on these visits. I ran into a recent graduate, Temyrick Mosely. Temyrick and I first met before his knob year. I had invited the entering knob football players and their parents to our house for a little gathering. It seemed each time I visited campus I’d run into him. We have a series of selfies we’ve taken together so of course last Friday we had to take another one. He’s working in the DC area now and was in town for the game. It was such an unexpected treat to see him.

Friday night was the first time I’ve been inside the field house for the Ring Ceremony since my son graduated. It was also the first time I watched the Junior Sword Arch perform in person. What a treat! After wards I took photos of the cadets going through the ring until Laurie, David and David’s date walked through. Since each year moms ask about what to wear I decided I take a good amount of photos so everyone can see the variety of outfits worn this special night. You can see all my photos from the evening and the weekend in this Facebook album.

Saturday was jammed packed with activity as the Saturday of Parents Weekend is each year. The rain was threatening all day but fortunately it held off until after the morning activities and before the football game. I began the morning in 4th battalion visiting the knob I dropped off on Matriculation Day. It was a treat to finally meet his mother too. From there it was off to 1st battalion to see the many Bravo families I’ve some to know. An added bonus was getting to see my son. He served his last day in the Army in early October and was in town celebrating with his fellow 2011 grad friends. It was great to see him so happy. I also learned that my ex and his wife are now host family for several Bravo knobs. It is such a small world. Of course I took plenty of photos of the knob promotion ceremony and the banners in each barracks I visited. (see this Facebook album) 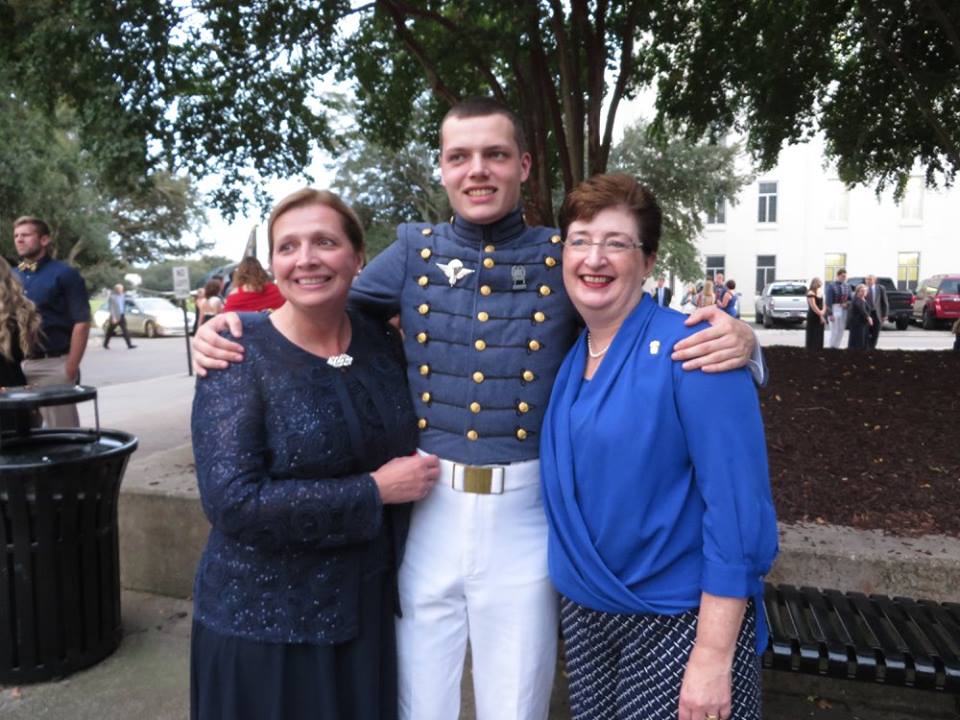 I had to leave campus to treat after the morning activities but returned to the campus area for a celebration dinner for several seniors I’ve some to know. It was an honor to be invited by a family of a Delta senior who also was extremely supportive of me and my son during his deployment to Afghanistan in 2012-13. Time really does just fly by.

Sunday morning was a good bye brunch at the Marina Variety Store with Laurie and her husband Bob. I am so glad we were finally able to spend time together this weekend. I look forward to seeing them again at graduation. From brunch it was off to campus to attend the Catholic Mass. The services this Sunday are special since each one includes a Blessing of the Rings for seniors. I spent the rest of the day on campus watching a volleyball game then walking the campus. 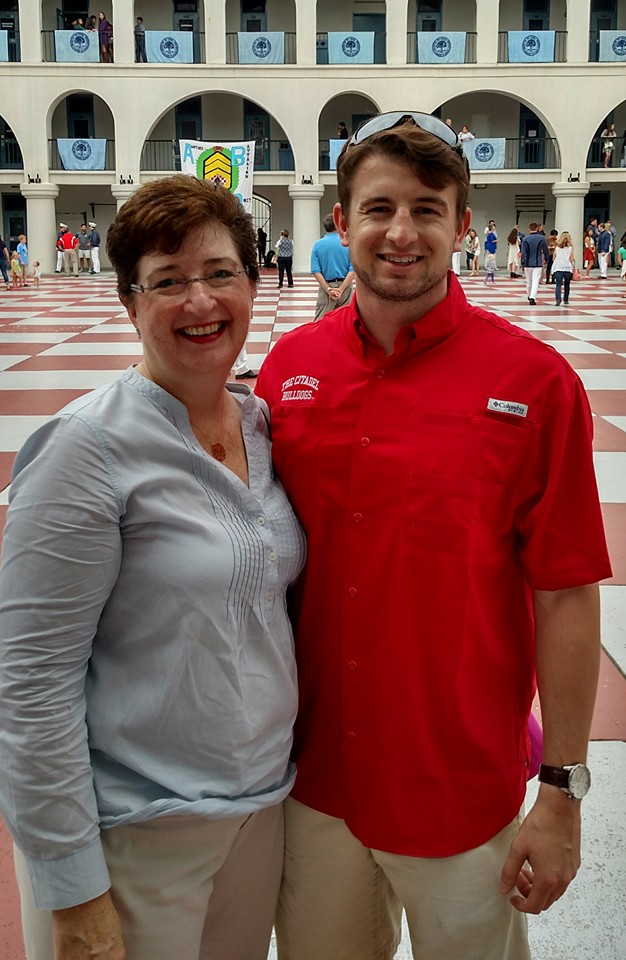 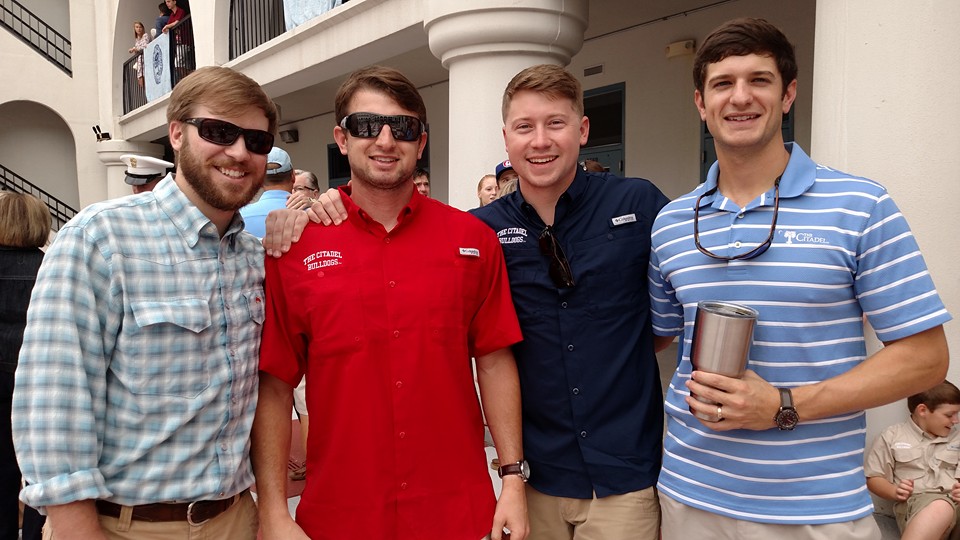 While the families have returned home the cadets had to jump right into mid terms. It is a time of year that is stressful for each class. The cadets look forward to the festivities of Parents Weekend and then are thrust into the intense study/testing period. Fortunately in the next week or so they will have a reprieve form the stress with the day of service. Cadets spread across the area and help at schools and community groups providing needed volunteer support for projects. A really neat addition tot he activities this year is the painting of a mural to honor the fallen victims of the shooting at Mother Emanuel AME Church this past June. The project is spearheaded by Professor Tiffany Silverman, the very talented person behind the Fine Arts department on campus.

Each cadet has their own experience on campus. The knobs at this point are either finding their stride and a workable balance with their school work and military training, or they are struggling to keep it all together. For many is falls somewhere in between. While I’ve not endured the 4th Class System I’ve been told by many cadets and graduates it is a struggle all year long just to keep going. If you are the parent of a knob who is struggling encourage them to seek support through the academic support center. Talk with their academic advisor and the academic officer in the cadet chain of command. They all want your son or daughter to succeed. Like Dumbledore said in J.K. Rowling’s, Harry Potter and the Deathly Hallows, “Help will always be given at Hogwarts to those who ask for it.” Help is available at The Citadel, but the cadet is the one who needs to seek the help. In his book, Sword Drill, David Epps describes the struggles of knob year and grades. A poor showing the first semester knob year does not mean the follow semesters will follow suit, but it does take focus and a lot of work.

In the weeks ahead the campus will host returning graduates for homecoming, then the quick march to the Thanksgiving furlough is anticipated. Parents of knobs will begin to hear stories of making a special hat for their senior mentor.

It is key for families to remember there is an ebb and flow to each school year and each semester of the year. As I mentioned earlier the cadets are on a rollercoaster of emotions, but you should not get on that ride with them. Listen to their struggles and then encourage them to look for solutions. Remind them of their choice to attend this school and that they have the inner strength to get through it.

If at any time you are struggling as a parent, reach out to your support system. It isn’t easy, but as I witnessed with my son and his friends this weekend, the results are worth it.

I posted a video to my Facebook page from The Citadel Brigadier Foundation dinner the other day. My friend Bobbie O’Brien reposted it to her blog, Off the Base.

It is an important speech for all cadets to hear. This young woman shares her perspective on the things other cadets complain about.

SIGNUP FOR NOTIFICATIONS ON BLOGS