The Matriculation Headquarters page of the citadel.edu website is updated for the class of 2019, with more updates to come throughout the summer. For the soon-to-be knobs and their parents it is a time of mixed emotions. If you are both feeling a mixture anxious and excited you are in good company.

It is very important for the entering knob to read through everything posted. There are some deadlines that you will have to keep up with throughout the summer. The first deadline is June 10. Your registration information must be in on that date. The other assignments are due at various times as posted. Keep visiting the Matriculation Headquarters page and the Commandant’s Matriculation Information page for updates throughout the summer.

Take some time to read through the Success Packet. The list of required, and optional items, is in this document on pages 6 – 7. The packet includes details about other rules. Take time to absorb all the information. Also visit the Citadel Family Association page for the “Nice to Have List”

Last year I wrote a post about transitions. Parents you may want to review that entry. The toughest part of knob year for many parents is the transition you must make. The Citadel is a leadership school. Your student will need to navigate the 4th class system on their own. Parents move to a support role. Moving out of the decision-making role is tough for many parents.

The next two months the rising knob should be working out daily. If they arrive able to meet or exceed the physical training (PT) requirements it will help with their transition. The PT requirements are very important. Each year some knobs report in poor physical shape. That just makes the transition for them harder.

Breaking in the black leather Oxfords is another thing that should be started as soon as possible. Wear the shoes often throughout the summer. Blistered feet is a major cause of problems for knobs in the first month.

Parents of the Class of 2019 are invited to join the Facebook page for parents (please email me to verify you are a parent of a knob. See the “About Dorie” section here for my email). The entering knobs should keep a low profile on social media. It is a good idea for everyone, but especially for knobs, to set the security settings on Facebook and other social media to Friends only. To keep a low profile do not use hashtags related to The Citadel on posts to Twitter, Instagram, Facebook or any other medium. The goal is to blend in and not call attention to yourself. If your profile lists that you are a cadet when you . haven’t even started knob year, you are inviting unwanted attention from cadets and alumni.

Many alumni chapters host cadet send off events. The Atlanta Citadel Club has a very nice dinner planned for June 18. If you are not sure if your area has an event, contact the admissions office at The Citadel. They can let you know if an event is planned for your area. The Georgia Citadel Parents Group has an orientation for parents scheduled June 14 at the Dekalb Library in Decatur. Margaret Landry is the chair this year. If you’d like her contact information just let me know.

It is an exciting time. Do yourself a favor and study up!

Visit the following sites for tips on getting ready and for reporting on Matriculation Day: 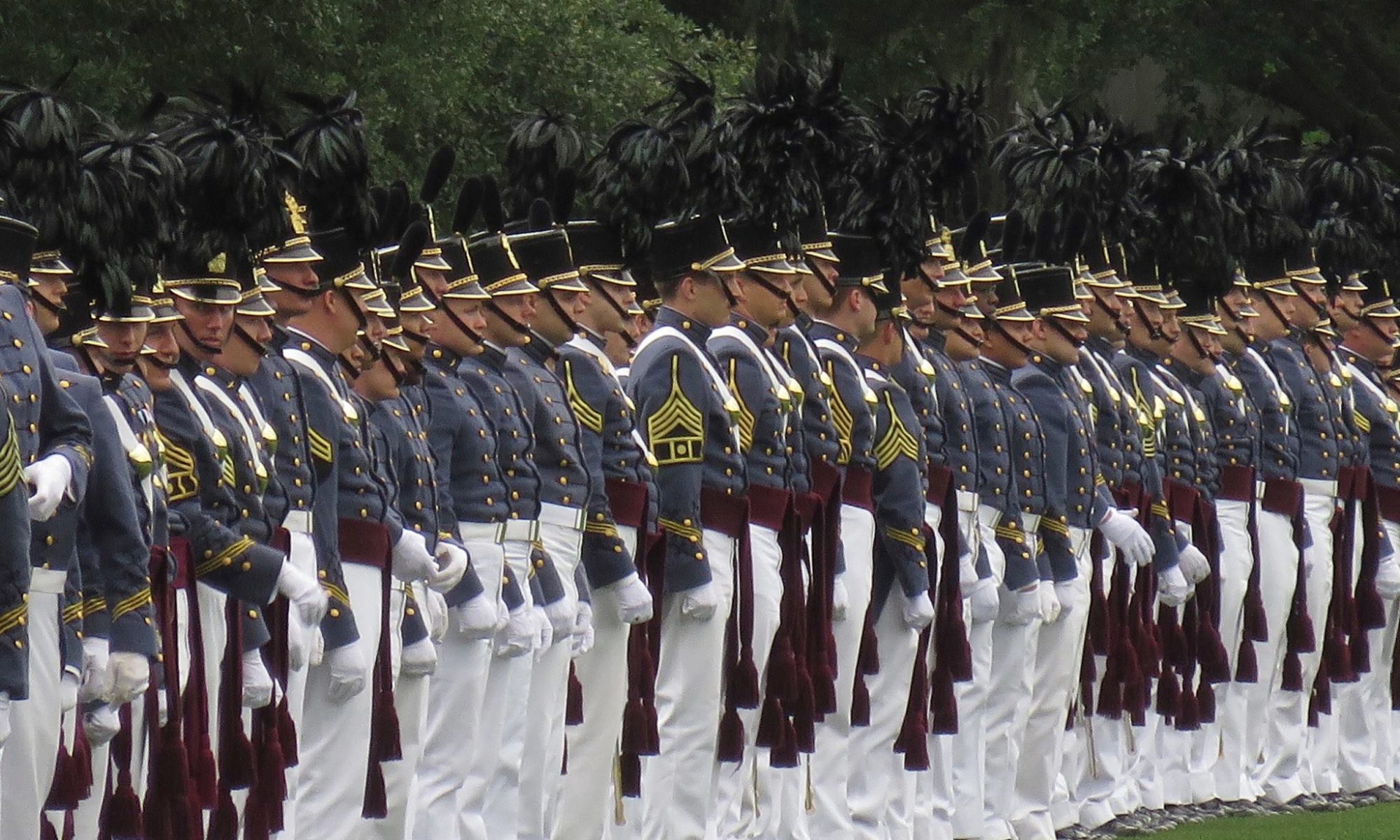 I had the honor of attending the graduation of the Class of 2015 last weekend. A young man I’ve known since before his Matriculation Day, Sadarius Lucas, invited me to be there for his big day. I arrived early in the afternoon Thursday before the Saturday graduation. It was fun to see cadets and families in the bookstore and on campus getting ready for the big weekend.

Friday morning I took my time getting to campus but had the opportunity to watch as the newly commissioned officers in the Air Force, Navy and Marines were rendered their first salute. While standing outside Summerall Chapel I was thrilled to see my long time friend, Gwen and her extended family. I wrote about Gwen a while back. We went to the same high school in New Jersey and ran around with the same friend group. When Gwen’s oldest was a knob she found my name in the Citadel Family Association list of volunteer and emailed. We picked up right where we left off 30 years before. It is just one story of many of the friendships that have been renewed between the parents of cadets. I say it often, I never expected that I would end up with so many new friends because my son chose to attend The Citadel. In this case it was a true gift to reconnect with Gwen.

I had the opportunity to finally meet a few people in the administration that I had not met before. We were all outside the chapel at the same time. I was floored to find out they all were familiar with this blog and also that I administer Facebook groups for parents of cadets, but not as surprised as I would be the next day after graduation. 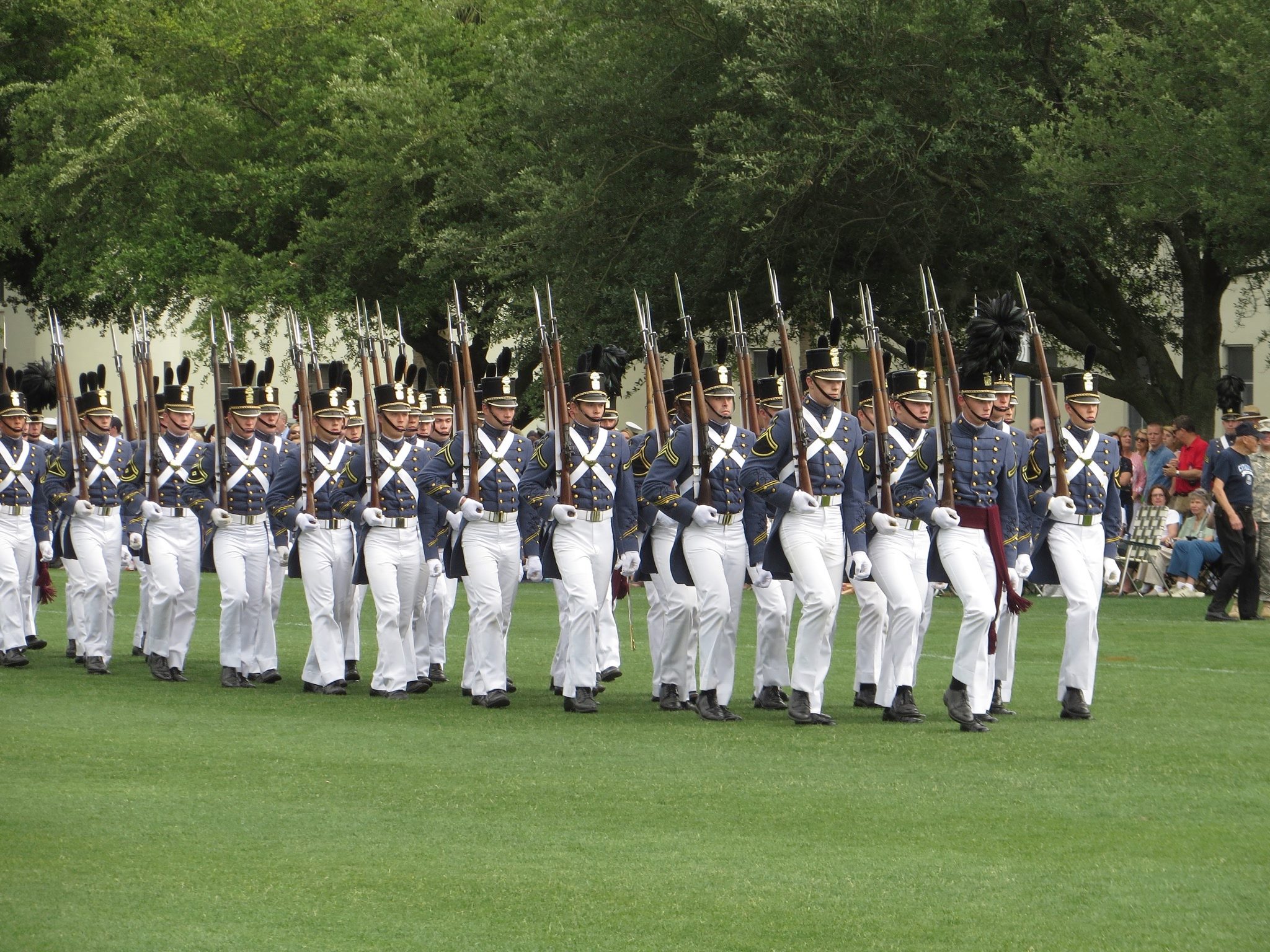 As the afternoon went on the weather was looking pretty iffy. Rain was in the forecast. The Summerall Guards began their performance and got through the entire series before the rain began. I noticed that the Secretary of the Veterans Administration, Mr. Bob McDonald was sitting next to President and Mrs. Rosa. I had met him briefly after a Town Hall meeting he held at the Atlanta VA in the fall. I went over to say hello. He continues to impress me with the work he is doing for our veterans. Right after he introduced me to his wife and his sister, who is the mother of a 2015 graduate, the rain began. Out of no where secret service men appeared with large black umbrellas. I’ve decided having “people” in the midst of a rain storm is a very nice perk.

I scooted to my car to wait out the rain. Fortunately after a 30 minute delay the rain died down and the final parade of the year, the Long Gray Line began. If you are ever in Charleston on the Friday before graduation, you owe it to yourself to be on campus for this parade. The rising cadet officers take their command and then the senior cadets leave their companies and stand shoulder to shoulder the length of the parade field to form a long gray line. At the designated time they march forward to the families and friends at the other side of the field and away from the Corps of Cadets. The seniors are grinning ear to ear as they march forward. They turn around and as their companies pass them on their way off the field they give a final salute. It is a very moving experience just to watch. You can catch a glimpse of the long gray line parade and the other events of the weekend in this video produced by the school.

Saturday, the BIG day, began early. Seating is first come first served so we arrived at 7:30 am to secure decent seats close to the podium and not too high up. It turned out we were only three rows behind Cadet Lucas. The commencement speaker, Keller Kissam, did an outstanding job of delivering an inspirational address to the Class of 2015. Take the time to listen to his address. You’ll be glad you took the time.

A highlight of graduation at a military college or academy is the final announcement by the president, Class of 2015 Dismissed! last Saturday we were not disappointed. The white covers were high in the air and the graduates were busy hugging and shaking hands. They were all heading out to points around the globe. Some will meet while deployed others may run into each other while doing business. After tolerating quite a few photos Sadarius and his mom and friend were off to Columbia, SC because he had to get to a 3:00 job interview! He is such a gifted young man I expect to see wonderful things from him in the years to come.

My final gift came as I was walking to my car near Mark Clark Hall. A golf cart approached and driving it was Captain Geno Paluso, commandant of the Corps of Cadets. He stopped his cart and said hello to me by name. We only met once before, briefly last fall at a football game. He went on to thank me for the help I provide to parents of cadets. I was floored that he knew my name. I was shocked to find out he knew that I do any type of volunteer work with parents. He ended up giving me a ride to my car. I like to tell folks he was my chauffeur for the afternoon. Fortunately a friend was right there to take a photo.

I made one last stop at the boat house and the dock before leaving campus to head to Savannah to see my oldest son. It was a wonderful weekend. I am now very busy screening the requests to join the Facebook group for parents of the Class of 2019. If you know someone with a student who will be a knob this fall, please pass along this link. And please ask them to email me for message me to confirm they are a parent of an incoming knob. My email address is in the “About Dorie” section of this blog.

SIGNUP FOR NOTIFICATIONS ON BLOGS